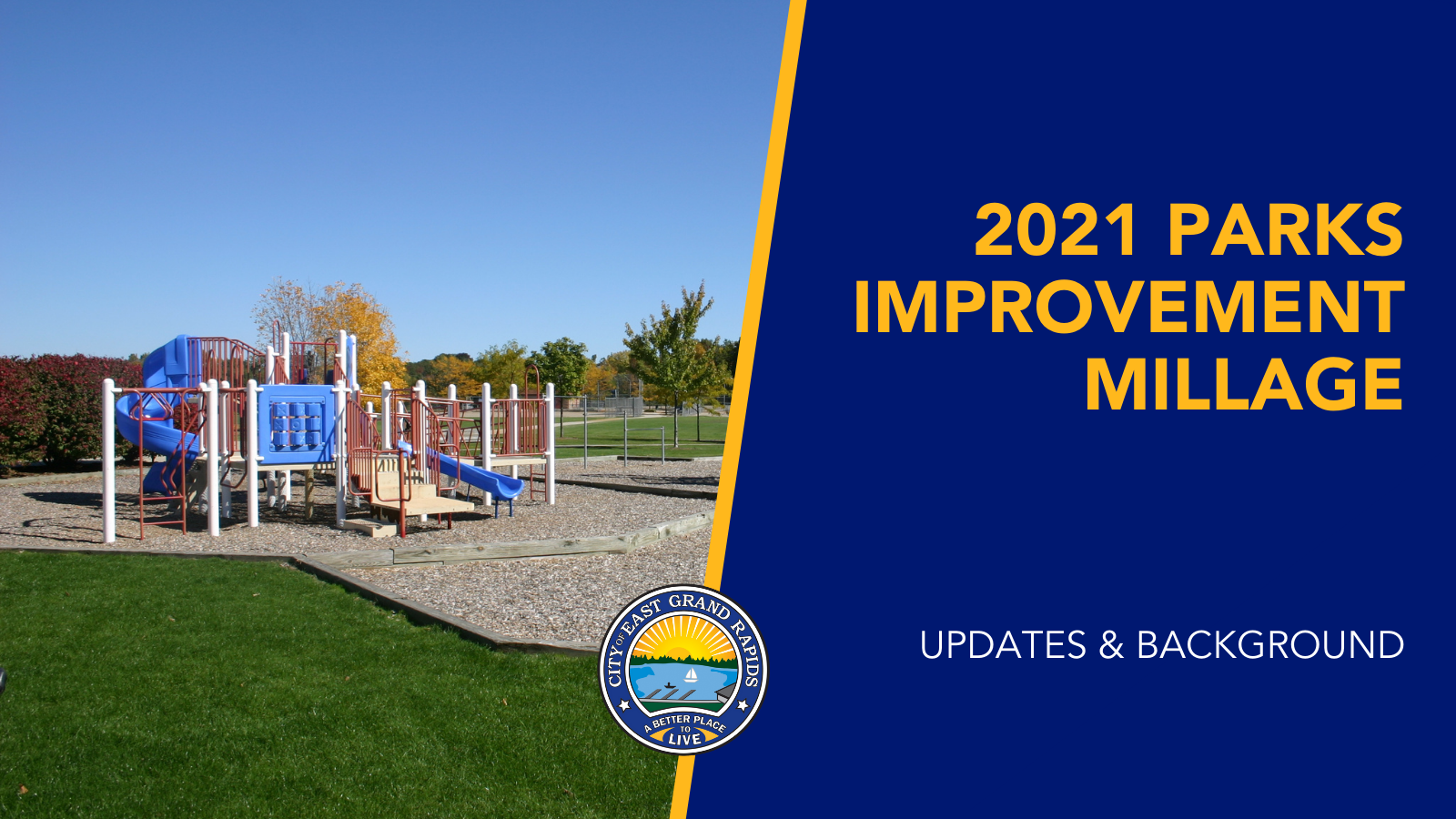 As approved by the City Commission, the City of East Grand Rapids is placing a millage request on the Nov. 2 ballot that, if passed by EGR voters, would provide funding for several improvements throughout the City's parks. Projects would be drawn from the City's 2018 Master Plan and the 2020 Community Parks and Recreation Master Plan, which incorporated many hours of input and ideas from residents.

Specifically, the millage would allow for extensive renovations and additions at Manhattan Park, trails through several undeveloped properties, shade shelters, a splash pad and sports courts. It also would include replacing five playgrounds in the City. Four of these playgrounds are on property owned by EGR Public Schools and the other playground is on City-owned property.

When voting on Nov. 2, residents will decide whether the City may borrow up to $7 million to complete the projects listed below. Please note these projects and their costs may be modified based on further public feedback and material and contractor staffing availability. All projects will include additional feedback opportunities prior to the City Commission's final approval.

If the Parks Improvement Millage is approved by EGR voters, the City would use the funding to cover all costs for the design, purchase and installation of new playground facilities at Breton Downs, Lakeside and Wealthy elementary schools, the EGR Public Schools Woodcliff Administration Building and Manhattan Park. Should the millage pass, there will be community feedback opportunities for each project before proceeding.

The millage also would potentially fund the following projects outlined in the 2020 Community Parks and Recreation Master Plan:

It’s important to note that if the millage is passed by voters, individual projects would still need to be presented and approved by the City Commission. This process will include separate public feedback opportunities.

The total cost of the improvements is estimated at nearly $6.4 million. To cover possible contingencies, the millage would allow the City to borrow up to $7 million by approving a new millage levy of 0.56 mills. Because the Wealthy Pool Millage, currently 0.1955 mills, will expire after the 2021 summer levy, the new Parks Improvement Millage would mean an increase of just over 0.36 mills for property owners.

A debt millage is levied for the purpose of paying the principal and interest on a bond for the construction and renovation of infrastructure and other capital assets. The City would borrow only what is needed to cover the actual project costs, which means the final amount could be less than $7 million.

How can I calculate my specific annual cost for this millage? Use the following formula:

If passed, the Parks Improvement Millage would go into effect July 1, 2022, at the earliest and would last 20 years.

If not passed, the City will reassess the listed projects and determine which are feasible to accomplish with the available long-term funding to ensure parks remain the vibrant community asset EGR is known for.

If voters approve the Parks improvement Millage, will all projects on the Parks and Recreation Master Plan list move forward?
Many of the projects will move forward, but not all at once. Based on resident prioritization, projects will be completed within three to four years, during which time individual plans may be altered based on additional community feedback and consultant recommendations.

After much discussion with residents and community members, the City and its consultants ranked residents’ top priorities as listed above. However, specific plans for each individual project will be presented to the Parks & Recreation Commission and City Commission before moving forward. All projects will include further community engagement sessions. For example, a dog park was listed among the most-desired amenities. While much research has gone into the costs of the creation of a dog park, specific logistics for building one in EGR will be needed before moving forward.

Can funds from the millage be used to support recreation programs or City operations?
No. All money collected from the millage will directly fund the playgrounds and other projects listed above.

Who decides what projects the funds are spent on?
While the City Commission will make the final approval of individual projects during its regular meetings, which are held on the first and third Monday of each month, these decisions take residents’ feedback and needs into great consideration. The listed projects above were prioritized by residents and community members over several years of feedback and engagement opportunities as part of the Master Plan and Parks & Recreation Master Plan.

What will the $7 million be spent on?
The projects listed above and five playgrounds — four owned by EGR Public Schools and one owned by the City at Manhattan Park. Additionally, the City will not borrow a lump sum of $7 million and instead will borrow as needed based on each project or group of projects’ cost.

What if, after further planning, a project does not cost the full amount listed above?
The City will borrow only the money it needs to complete projects.

What will the new playground equipment be made out of? Will it be sustainable?
Specifics for each of the projects listed above, including the playgrounds, have not been decided yet. If the millage passes, the City will work with EGRPS to select the right playgrounds. Sustainability is an important factor for entities and residents will have several opportunities to voice their thoughts when more detailed plans for each project is presented to the City Commission.

Will the federal COVID relief windfall announced this past spring be used toward the millage?
The City doesn't yet have the final guidance yet on how the federal funds can be spent, but is reviewing it closely. If the millage is approved and the City is permitted to use some of the COVID funds for one or more of the projects proposed in the 2021 Parks Improvement Millage, it will reduce the amount ultimately borrowed.

Still have questions? We're continuing to craft FAQs to help all community members understand this millage proposal. Fill out our form so we can add your questions to the list.

May 17
Millage proposed to the City Commission for initial discussion; Commissioners noted municipal bond rates are at historically low rates and appear to be stable going forward, making the cost of borrowing attractive.

June 21
City Commission continues discussing the millage at its meeting, decides to wait until July 6 meeting to vote

July 6
City Commission meeting (rescheduled from July 5 due to holiday closure); Commission voted in favor of including millage on November 2021 ballot